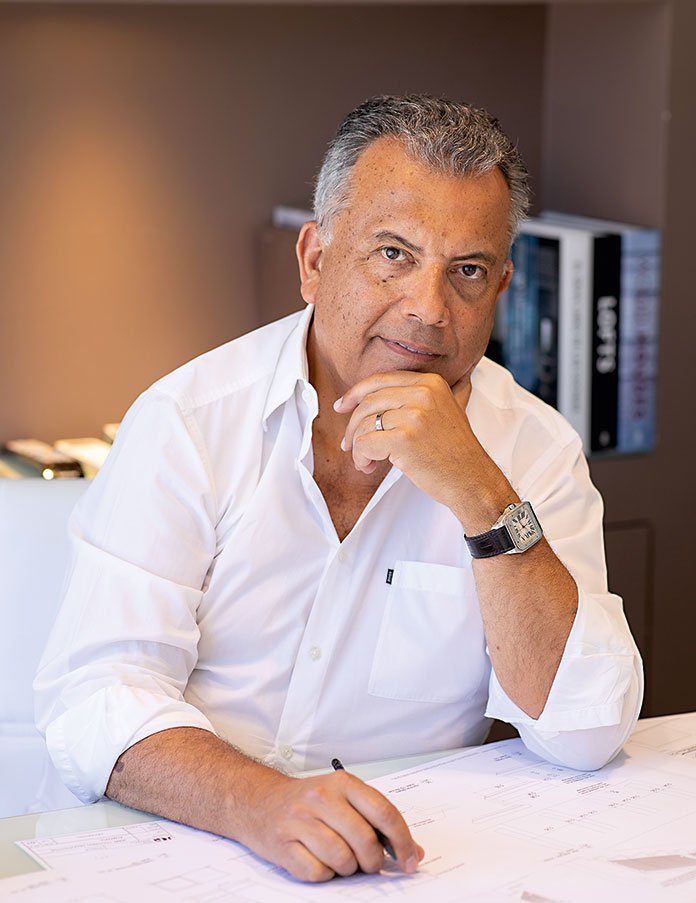 After finishing his studies, he was invited to take on the position of Director of Planning and Projects at Vale do Lobo. In the ten years that he was part of the resort’s directorial team, he gathered experience and contacts, and the desire to practice architecture on his own terms began to grow. Jaime Coutinho thus opened his architecture firm in 1989, but continued working with the Algarve resort in a consultancy role for another ten years. Work in his firm grew to such an extent that any parallel activity became impossible and in 1999 he abandoned his ties with Vale do Lobo. Jaime Coutinho Arquitectos (JCA) thus came into being. Nowadays, in addition to technicians, the team is made up of five architects and soon the firm will be expanded to allow to it to cope with a greater workload, because «over a long career of great consistency and professional solidity», JCA «has achieved a standout position in the local market».

What led to the creation of the JCA firm?
During the period in which I was Director of Planning and Projects of the Vale do Lobo tourist resort, with the experience and contacts acquired, I became more and more motivated in developing my own independent professional practice. In early 1989 I then decided to leave my post at the resort to embrace working privately. I started Jaime Coutinho Arquitecto on my own. However, shortly afterwards, I was invited to continue my ties with the resort, establishing a consultancy relationship, which continued for another ten years. In 1999, no longer able to juggle the two, I ended this relationship for good to dedicate myself full time to the firm’s workload. At that time Jaime Coutinho Arquitectos came into being, seeing as the firm’s staff already included two more architects, culminating with the five architects making up the team at the moment, together with other technicians.

How can a house’s architecture transform the life of person who lives in it?
From a serious and somewhat pragmatic perspective, a house should be seen as the ‘sanctuary’ of the person who inhabits it. In my view, a house, before any aspects related to aesthetics, must primarily be subordinate to the functional needs of its users, in order to fulfil its crucial role of ensuring an environment of well-being and comfort, in full and total harmony with their modus vivendi. That’s why JCA uses "design for lifestyles” as its motto.

Is there any language, transversal to every project, which you could describe as JCA’s ‘hallmark’?
If you had to define, in a word, the language that transcends all our projects, or JCA’s ‘hallmark’, I would say ‘temperance’.
"A house should be seen as the ‘sanctuary’ of the person who inhabits it”

To what extent does expansion in the construction sector influence your firm?
Being able to respond to requests is our main concern at the moment. With immediate effect, after a period of taking on more technical staff members, we will start work on expanding the firm, thus doubling the space available.

Do you prefer working on reconstruction projects or new structures?
I’m unable to answer that. Both types of projects provide different challenges and, as such, different stimuli.

JCA is more geared towards the residential market. Why is that?
This is not something that we’ve chosen. It is the natural result of my career, in which the residential aspect has always prevailed. However, parallel to this we have developed projects in different areas, having twice refurbished the bedrooms and some social areas of Hotel Penina. We designed the new church of Almancil, which was opened about a year ago, while work is underway on a Parish Centre in Almancil. We have also designed several restaurants and bars, among others.

Are there any projects that you could highlight for having been particularly challenging?
I would highlight the new church in Almancil, for obvious reasons. At the request of the Parish, the project was meant to find its inspiration in the small yet iconic and beautiful baroque Church of São Lourenço. A request we respected, albeit with a language of modernity, especially in the interior.

What goals does JCA intend to achieve in the near future?
The main goal is to maintain a leading position in the local market, which is has been built over a long career of great consistency and professional solidity.