The daring of a visionary 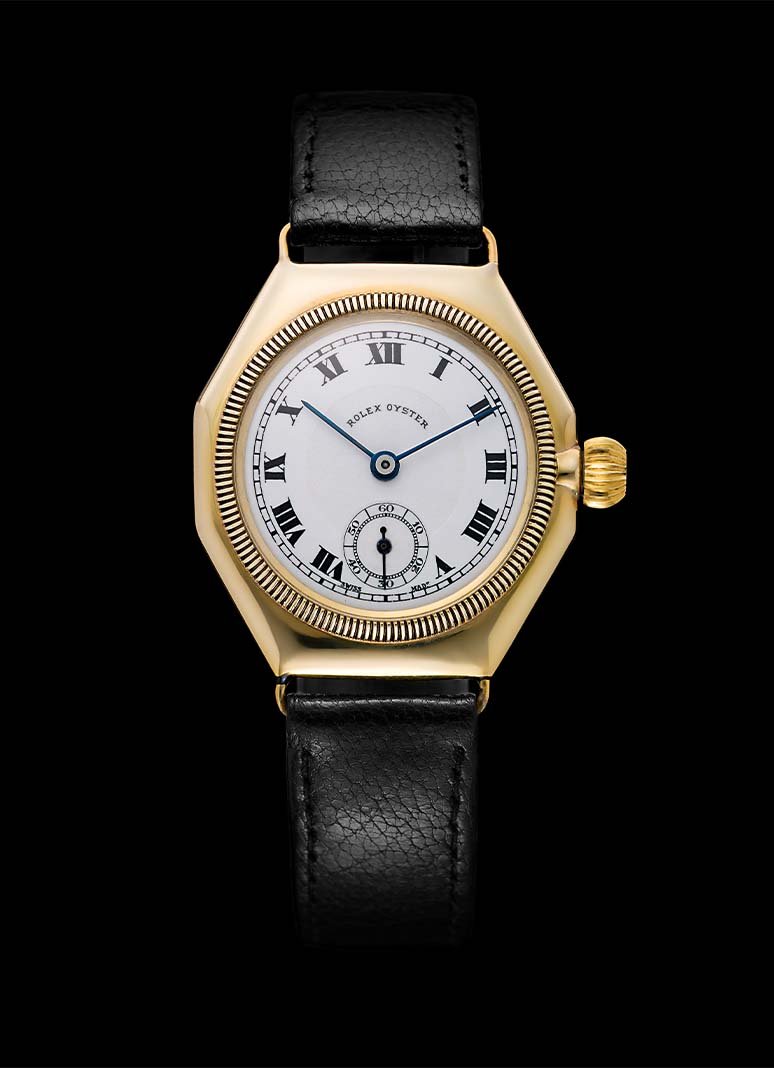 He died in 1960, but his immeasurable legacy in the art of measuring time will last until time itself ceases to exist. Hans Wilsdorf, the timeless founder of Rolex, was a visionary par excellence. While watchmakers around the world remained sceptical about wristwatches and believed that this new object was doomed to failure, young Hans, daring, determined and far ahead of his time, catapulted the Rolex brand into a unique position, a benchmark in haute horlogerie.
In 1905, at age 24, Hans Wilsdorf founded, in London, a company specialising in the distribution of timepieces. He could already see the advantages of wearing a watch on your wrist, even though he understood that precision needed to be improved. Wilsdorf was certain that it could become an object that was not only elegant but also reliable. He also wanted his watches to have a short name, which could be easily pronounced in any language and which was visually appealing when stamped on his watches.
Rolex’s first efforts were to improve the quality of watch mechanisms, achieved in 1910, when the Official Watch Rating Centre, in Biel, granted, for the first time in its history, the Swiss Certificate of Chronometric Precision to a Rolex wristwatch. Four years later, Kew Observatory, in Great Britain, awarded a Rolex wristwatch a class "A” precision certificate, a distinction which until that point had only been given to marine chronometers. From this date onwards, Rolex watches have become synonymous with precision.

The Rolex Oyster was created in 1926, became self-winding in 1931, thanks to the invention of the perpetual rotor, and is the pillar of a collection of legendary watches.

As it is the city par excellence associated with the watch making tradition, in 1919 Rolex moved to Geneva, Switzerland. From then on all the conditions were in place to set into motion a story driven by passion, innovation and the constant pursuit of excellence. The first waterproof watch, the Rolex Oyster, was created in 1926, became self-winding in 1931, thanks to the invention of the perpetual rotor (the forerunner of contemporary automatic systems), and is the pillar of a collection of legendary watches.1945 was also an important year as it saw the birth of the Datejust, the first self-winding wrist chronometer to indicate the date on the dial. The Datejust is equipped with a Jubilee bracelet, specially designed for the model, and with a fluted bezel, elements that make it instantly recognisable as a Rolex. Initially it was available in the men’s version, but various models for women were created in the following decade.
Today, more than 100 years later, Rolex has already registered more than 400 patents and continues to produce countless important innovations that mark the history of contemporary watch making and history in general, as several of its models have been associated with great feats. Rolex’s modern facilities at four pioneering locations in Switzerland allow the company to honour the legacy of its founder, to exercise creative freedom and to achieve its innovation potential by designing, manufacturing, assembling and testing its watches thanks to its knowhow and commitment to its customers.